Gabby: From Feral to Family

When I started working at Transitions LifeCare (TL) I didn’t realize I’d receive far more than a paycheck. I’ve been blessed with so much more. I’ve made such wonderful friends here. I mean, I’ve always made wonderful friends everywhere I’ve worked but this is a bit different. I would say I never work a day without getting at least five hugs! It’s such a caring group of people; maybe it’s because we provide hospice care. 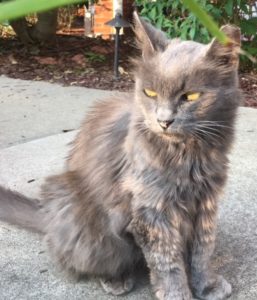 Love not only comes from the people I work with, but from one very special cat named Gabby, who was named after the Angel Gabriel. Gabby was a feral cat who had lived on our campus for a few years. The TL property abuts the NC State’s small ruminant farm where sheep and goats roam in the beautiful fields. Gabby came to make her home at TL and gave birth to two adorable kittens in a storm drain. The TL team trapped Gabby and her kittens and brought them to a local vet. The two kittens were adopted but the vet said Gabby was too wild, couldn’t be tamed, and should stay at TL where she would help keep other feral cats and rodents away. She was spayed and given immunizations and then released back at TL.  A bin with straw was put out for her and she was given food and water. Sightings of Gabby were rare when I first started working here.

I was interested in seeing this feral cat and wondered if I could get near her. She would watch me from a distance and I would talk to her. She would meow but any attempt I made to get close to her failed. Each day, I would go out and just sit near her, talking to her and trying to get her to come to me. She would meow and strut by me with her tail in the air. I got daring and would touch her tail and she would spin around and bat at me. But, she kept coming back! Each day we both got a little more daring with each other and I could feel a bit of trust forming between us. I started leaving my hand outstretched to her and she finally put her little, pink cold nose against my finger. Breakthrough! From that day forward, we got closer and closer. First a little pat on the head, then a little pat on her back. She would bat at me and bite me but only as warnings. She had giant mats in her fur and one was on her back near her tail. I went brought a brush wondering if she’d even let me touch her with it. After a little hesitation, she started rubbing her face on it. I started brushing her and she would just sit there and enjoy every minute of it. This was another great accomplishment.

About a month ago, Gabby showed me her belly as I was brushing her and I saw it was open and infected. After my three failed attempts, my colleague Rosa got her into a cat carrier to take her to the vet where we were informed she had cancer. They gave her an antibiotic and pain meds and we brought her back to TL. She began receiving pet hospice care; everyone continued to love her and care for her. Then, she began losing her balance and losing weight. She showed me her belly one night and it was worse than ever. She was in pain, no doubt about it. She could barely walk or lay down comfortably. We made the decision to have the vet from Lap of Love come and help her make the transition to Rainbow Bridge.

I already miss her so much as I know so many others do as well. She has left paw prints on many hearts here at TL. I’m so glad she didn’t have to go through her whole life without human touch. We have been blessed to have had her as our hospice kitty. Rest in Peace, sweet Gabby Girl and know you have taught me that every life is worthy and capable of being loved and giving love.

bereavement, cats, pet loss, rainbow bridge
Previous Post
Disenfranchised Grief
Next Post
“I did what my country asked me to do”