Paying it Forward (The Gift of Advance Directives)

This blog originally appeared on nhdd.org in 2012. While some modest edits have been made, the original message still shines through.

Last winter, as I celebrated the holidays with family, I was grateful for something a bit unusual… a family that is familiar with my wishes regarding end-of-life care.

I recently completed the Five Wishes document, which gives us each an opportunity to think about and write down what we want if we are in a position where we face a life-limiting illness or injury and cannot speak for ourselves. The other important factor is to then take it a step further and talk about what we want with our loved ones.

I’m was teaching a course about end-of-life care and insisted that all of the faculty complete the forms before we asked others to do it.

Insisting people started with themselves meant I had to finally bite the bullet and think about this myself. Death is the great equalizer, and we know that we’re all going to get there eventually. Including me. Despite that knowledge, there it sat on my desk. For months. And months. But 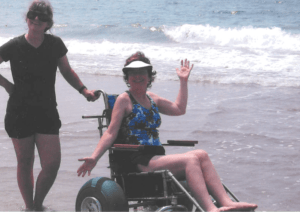 The author’s sisters Anne and Carolyn.

once I got going, it wasn’t so bad. Anticipation was the worst part.

After all, I had sat with my 52 year-old sister Carolyn as she died, after a 5-year struggle to live and work with ALS, known as “Lou Gehrig’s disease.”  ALS is a degenerative neurological condition, where one gradually loses all voluntary muscle function and eventually can no longer move, speak, or eventually, breathe. Carolyn is my inspiration. She was lucky to live in the San Francisco Bay Area in California, an area that provides many services to people living with disabilities. She maneuvered her electric wheelchair around Alameda, zooming around on sidewalks with wheelchair cuts, running errands and going for long “walks” in the neighborhood. When she could no longer drive, she took a shuttle for handicapped riders, sometimes traveling 90 minutes each way to get to and from work. Her stubbornness and independence were at once both highly frustrating and inspirational.

While Carolyn was still able to communicate, we had a series of frank and loving conversations about what she wanted as her disease progressed. It took several months to do this well. Carolyn became very clear and shared “my life is worth living as long as I can see the smile on someone’s face.” She did not want to be “locked-in,” her way of describing being fully alert and aware of her surroundings, but unable to communicate in any way, even to indicate “yes” or “no” answers.

My job as her sister and her advocate was to help ensure that we had all the difficult conversations that we needed to have in order for her to live the rest of her life the way she wanted.

Not what “most people with ALS want” or “what I think she wants, but she can’t tell me” — but what I and our family knew she wanted.  We knew because we asked, we cajoled, we listened, we challenged her, we debated with her along the way, and then when we really knew that she was clear, we helped her get what she wanted. I’m not saying it was easy. It wasn’t. But it was worth it, because I loved my sister, and I am at peace knowing that I don’t have to wonder “did we do the right thing?”

Although she had a fatal, incurable disease, we advocated for her so that she could live life on her terms.

She made choices that I was not always comfortable with, and which I would not necessarily choose for myself, but they were her choices. And we respected and honored them.  So, during the holidays, I’ll be talking to my loved ones about my wishes around end-of-life care. I’ll honor my sister by “paying it forward” and making these decisions at least a bit easier for my family and friends. After much procrastination, I did finally complete my Five Wishes document. When I realized that it really wasn’t about me at all, but really about my family and loved ones, I got the job done.

advance directives, ALS, Five Wishes, healthcare
Previous Post
Guilt and Regret
Next Post
To Plan or Not to Plan? That is the Question