My dad was a character with character.

He was born April 15, 1915. When he shared with us that April 15 was the day President Lincoln was shot and died we asked, “Did you know him?” “Not personally,” he quipped. I do believe we are part of Lincoln’s legacy as we all inherited Lincoln’s nose.

After making his peace with this world, he breathed his last and came to his final rest on Armistice Day 2004. Symbolically, the same day the peace agreement was signed ending WWI on the 11th hour of the 11th day of the 11th month in 1918, the same year his first love, my mother, was born.

I’m the seventh of his seven sons and was born two months after he turned 40. There’s an advantage to being the youngest in the tribe of seven. By the time I came around he had lots of practice disciplining the previous six and was too worn out to be hard on me.

Dad was well-read and an encyclopedia of knowledge. Whenever he was asked where he went to college he would always reply, “I got my education from BC…that’s not Boston College but blisters and calluses!” My father instilled a work ethic in each of us by example of grit, wit, wisdom, and guidance.

He was an endless source of wicked and colorful witticisms that I now call “Jimisms.” For example: 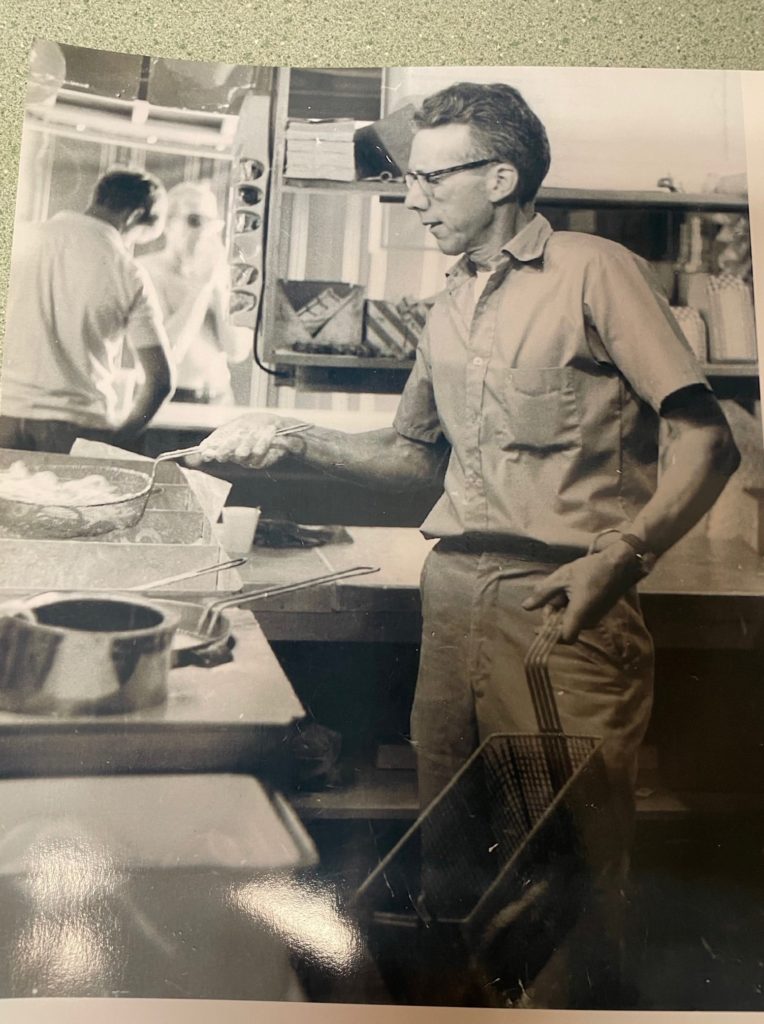 My dad frying onion rings and my older brother Gary in the background serving a customer at “Philbrick’s Snack Shack.” Gary died two months after my father, both from cancer. Gary was 55 years old and left behind his beloved wide Dianne and their children Ian, Lindsay, and Tracy. It was caring for my dad and brother that inspired me to change my career path and do hospice work.

The wisdom, strength, and persistence that he and my mom passed on to us was born out of challenging seasons: from growing up as teenagers during the Great Depression, to getting married just before living through WWII, burying two of their seven sons, building businesses together, and sticking side by side through thick and thin, for better or for worse, richer or poorer, in sickness and in health. They were tough as nails and stuck with each other like Krazy glue.

Lucky for me they decided to move the Philbrick clan out of Boston and began their next chapter on Cape Cod where I was born in the summer of 1955. Dad and Mom settled in the small and quaint town of Orleans, on the elbow of the Cape. My dad decided to surprise my mother by buying an old, run-down full-Cape house, half a mile from Cape Cod Bay. His $6,000 investment fully showed the wear of a hundred years of blistering northeast storms. Mom said she broke down crying when she first saw the place and I suspect that some of those were tears of anger for not being part of the purchase decision.

In hindsight it became clear that my dad had better than 20/20 vision. One of his superpowers was foresight. I recently looked up that old house online and discovered that it is now valued at more than $750,000!

It’s ironic that I’m reflecting on my father and his legacy on what would be his 106th birthday as he wasn’t much into remembering or celebrating birthdays. In fact, I recall the day I turned 12. My dad was driving my mother, my brother Jeff, and I to work at Nauset Beach where our family business, Philbrick’s Snack Shack was to open in a couple hours. About halfway there in an effort to solicit a “Happy Birthday” wish from my father, my Mom said, “Jim, did you know today is Mark’s birthday?” to which he responded, “Huh.” He then fumbled his hand into his back pocket, retrieved his wallet, and pulled out a crumpled $5 bill and tossed it to me in the back seat along with a “Here you go, Happy Birthday.” That was my last birthday celebration. It was to be my graduation from childhood and my initiation into the adult world of work and responsibilities.

I’m sure today that may appear harsh and cruel to many but that was the norm on Cape Cod where the season to “make hay while the sun shines” was short. Families had from Memorial Day to Labor Day to sow and reap the harvest from tourists who flocked to the Cape, basked in the sun, and relaxed by the ocean, thanks to the fruits of our labor. Almost every kid I grew up with worked hard during the summer serving the tourists by laboring in restaurants, cleaning cottages, or working the charter boats. Once Labor Day weekend wrapped, we would wave farewell to the tourists and their cash. Businesses would board up and batten down the hatches in preparation for winter’s winds.

At 12 years old, I felt sad that that $5 was the last gift my father gave me. Today, at 65 my hindsight is far better, and I now realize the $5 he gave me for a birthday gift would be the smallest of many gifts he would bestow on me over his lifetime.

Mark is director of education at Transitions LifeCare. Over the years, he has served as an onion peeler in his family’s Cape Cod restaurant, nurse, hospice home director, education leader, father, grandfather, and end-of-life care advocate. When not working, Mark can be found hiking or volunteering at his church.