The Rhythm of Respiration

This post originally appeared in Let’s Talk Transitions in August 2017 and we think its message is as timeless and soothing today as it was then.

In the timeless pause immediately following a baby’s birth, the attenders wait with held breath for the wee one to draw her first. A lusty wail signals the greedy gulping and successful filling of little lungs, and there is a collective sigh of glad relief. 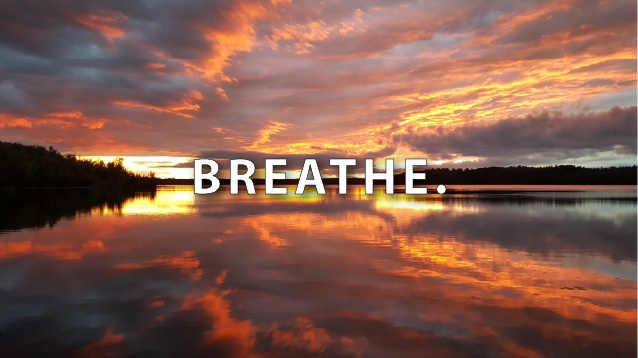 It turns out that the four days spent in the sacred cocoon, the grace-insulated space of my mother’s dying, has become my soul’s ground zero. Everything that matters now was distilled there, where there was no awareness of time, worry, or fear. In mama’s dying place there was only family and love, friends and fellowship, gratitude and peace.

Mine was a front row seat to mortality’s march on my mama. Over the course of those days her respiration went from measured and deep to raspy and shallow until it was, in the stillness at the end, merely an occasional, dainty sipping of air. Death chased mama’s breath up from her feet into her mouth and, finally, out of it.

At the last, I held in my arms the woman whose arms had first held me. My mother had become my daughter. She’d given me my first bath; I gave her her last. She’d released me to live; I released her to die. It is the way of life: roles reverse, seasons change, time’s river rolls forever along with little fanfare or flash.

“To everything there is a season, and a time for every purpose under heaven . . .”
King Solomon

During mama’s dying time I brought a mattress into her room and positioned it about three feet from her bed, allowing me to rest while remaining close. Early in the morning of her death day, my husband lay beside me on that mattress, holding me as we listened for changes in mama’s breathing. Overwhelmed by the urge to fight the inevitable, to stand firm against the letting go, I rose from the warmth of my husband’s arms, crossed the gap that separated our mattress from her bed, crawled in next to my mother, and cradled her cool, stiffening frame.

Maybe I thought I could go with her, or at least find a way to bring her back. Mama’s ragged, shallow breathing reminded me that the divide was ever-expanding and would, painfully soon, be uncrossable. Reluctantly I chose to release her, and moved back to the mattress where, held by my husband, I cried my eyes out.

Mama would have applauded my choice to return to my mattress, to let her go, for it was she who’d spent the respirations of her life teaching me when and how to release what could not be held. My mother understood: loss is not only the way of life, it is also the way to life.

The rhythm of respiration is the rhythm of life. And the art of life is just to keep breathing through the receive-release rhythm. Breathe in, breathe out; receive, release.

Haven Parrott is Manager of Bereavement Services at Transitions LifeCare. She is grateful for and passionate about the opportunity to support grievers. Haven and her husband, Mike, have four grown sons and two grandsons.

Image by Free-Photos from Pixabay